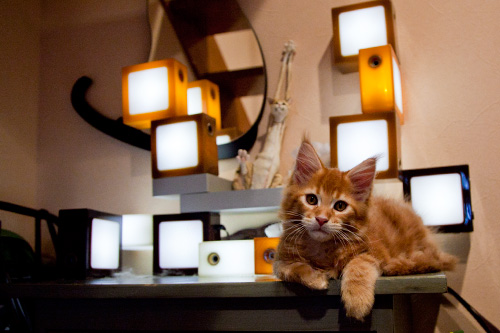 As he seemed to be really red, I used to call him "Reddy".

Having Wendy, Edward, Scarett and the new born Victor, our cattery became quite colorful.

As born red, we can easily find him so it looks like he is no good for hide and seek.

My only worry was that as he was the only child he did not have any other to play with.
His mom Wendy was a good mother but comparing his circumstance with his cousins, he looked a bit lonely when he became 4 weeks old.
So we finally decided him to join the 3 weeks older cousins group.
It looks like that was the right decision for him but Wendy took couple days to be used with her nephews and nieces.

Now he is growing friendly and mischievous boy.
My husband calls him "Brave Victor".

He loves to play with broom and dustpan but does not like the cleaner.
Loves to climb peoples back as a ladder.


About the origin of the name:

As his mom is Wendy and dad is Edward, and both names origin is from England, we name their son Victor also has the origin from England.
The another reason is as I was born in Victoria, Australia and having English name Wendy, I was thinking to use Victor or Victoria depending on the new baby's gender.

Victor has other litter mates when he was born but sadly others all went back to where they came from.
He was the only one decided to live in this world and that also made us to decide to name him Victor to let him lead to victory in this new world of his.