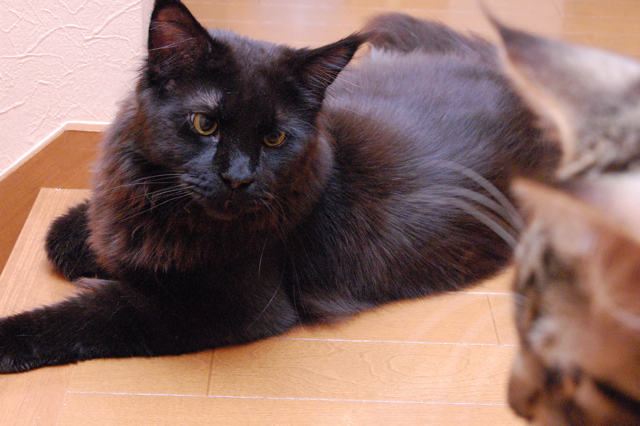 His partner is Scarlett, year and 1 months old, really a beautiful girl.
As his children are still too young, he hasn't yet met them.

The very 1st litter of Emily and Leon.
He is a black solid big body guy.

An open-heart and an innocence guy.

His own mother Emily was not so much a good mother, so after 3 months old he was sticking to his aunt Angelina who also delivered her own children in March.

As he drank so much of breast milk from 2 mothers, I am not sure if this is true or not, he is now more than 7kg.
He may grow more heavy, but these days as he is showing interest towards girls, he is not eating so much as he used to be.

He is also the very one Micael took care.
Raphael is now trying to become a "Boss" of the cattery.

But as he seems to be "Hit first and talk afterwards" type, he does not have so high reputation from girls.
I hope him to learn how to escort girls more gently.

He tried to dominate the seniors several times, especially when Leon was away, but didn't succeed

It is said that he is among to become the position of the 3rd boss (1st: Don Juan and 2nd Leon), but since his trusted brother Gabriel has moved to the new family, his ambitious hasn't come true yet.

He talks with really high voice which does not match his body.

Keep licking humans fingers for long time till the one say "Please no more!".
No good to ride things which has a wheel, very weak with this!


The origin of the name:

From Archangels.
Named after Micael.
Meaning "God Heals". (is it why he loves to lick others forever?!)

Yes, he is a type to be recognized!