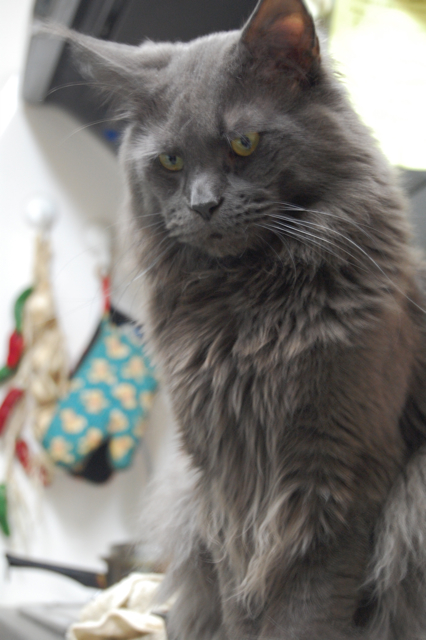 Leon is the step brother of Don Johan.
He and Don Johan were the very first Maine Coons whom started to live with us.

They both came from a cattery in Tokyo in 2005 May.
Leon moved to our place at 5 months old.

When I first met him at the breeder’s house, I really fell in love with him at a glance.

He had some kind of mystic atmosphere, and it stroked me.

Till 12 months old, he was really character full of curiosity.
But as he grew older, he became to be a really timid and shy guy.
Some thing changed him but we still can not figure out what had happened to him.
It looked like that he suddenly chose to change his style and became like a monk.

After 2 years life like a monk, 2 new girls joined our cattery. From then he often approached to the female kittens and was asking for dates. Girls arrival may be made him realize that he is still a stud guy.

It was a quite surprise to us that he was emphasizing him as a male.
We never saw him acting like that before. Girls easily changed his character and acting!

He was mated with Angelina, Emily and one more girl at other cattery and finally became farther of 16 children.
He retired in 2007, and now living a calm and quiet life of his.

Some people asks us does name Leon comes from the famous French Move “LEON”.
The answer is no!
Leon came from the Taiwan’s famous movie star Leon Dai-Lee.