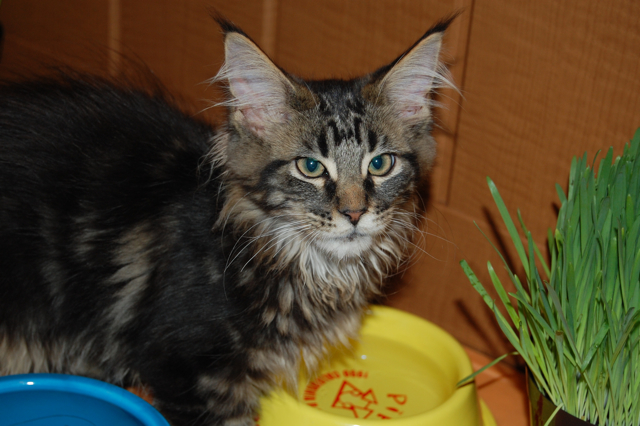 Emily came with Angelina also from the same cattery.

She was a timid and shy girl always hiding behind Angelina.
It took a little bit extra time to know what kind of a girl she was.
But she went well along with Micael too and easily fitted into the kittens society.

Because she was really a quiet girl, Leon often stalked her and we had to put him away from her. I think it was a really annoying period for Emily at that time.

On reflection, I think we did not play with her so often comparing to other because of her being so quiet.
And may be for that, she became a “In-house Stray Cat”. And even now daysa, she always runs away when we walk near by.

In 2008 she gave birth to totally 6 kittens.
Luckily I was chosen by her to help her deliver the babies both times. （I was glad to know that she was counting on me）

Emily was a nervous typed mother and she was always trying to move her kittens to a different place where she thought much better, but never could be best.

After her 2nd litter, for 1.5 years she again chose to live like a stray cat again.
But now we see her everyday and sometimes she enjoys playing with us.

She seems to be doing well with elders, but seems that she does not like the young ones and kittens.

Took from famous actress Emily Watson. She has her style and originality but maybe our Emily traced her too much.