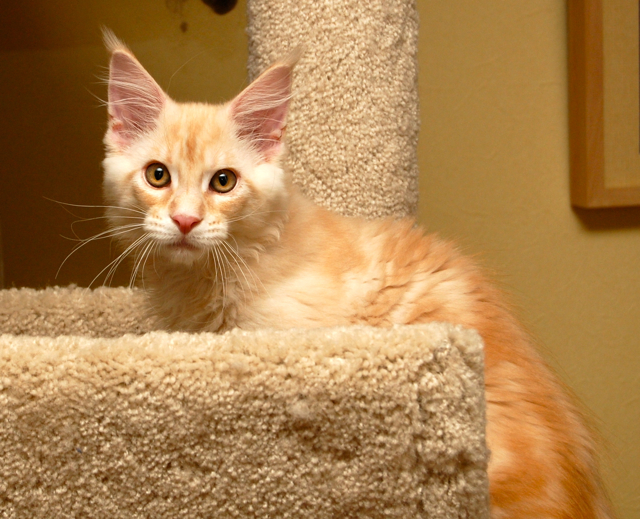 Edward mated with Wendy and became a Farther of a Red Classic tabby boy Victor.
(Please refer to Victor"s page)

In Aug. 2009, he and her litter sister came to Join POPOKILANI.

First we were only to have Scarette but hen we visited their breeder, we also fell in love with this red silver boy.

He is a red classic tabby boy and now is 6kg at age of 8 months old.
May b not huge, but with his thick and fluffy shaggy coat, he looks big enough to go to the show.
And also his eyes are beautiful and the line around his eyes makes him really tough and beautiful.

May be he is aiming to become a Kabuki actor of the cat's world!

Well to tell the truth he seems to be no good reading the atmosphere, so some times he steps on the other cat's body or dives from the loft to our bed without thinking. (I do not know if cats thinks deeply but he he is the type doesn't care much!)

I think this is kind a gift of him having that even acting too much naturally, I never saw him being hated or ignored by others, lucky boy.


So cheerful and natural, he could be counted as Gentle Giant.

These days he seems to be looking for a girl friend.

He curls his back when we try to pad him.

About the origin of the name:
From the famous actor Edward Norton. Or because his chest is so curry and looks like the frill of the middle ages of Europe cloth and reminds us of the nobleman.
I would like to say from E, Norton, for he is one of my favorite actor!

Well the truth is... from the famous Japanese animation "Cowboy Bebop".
I don not know why the person named him does try to hide the origin... anyway this is the truth.

Thanks to Cattery CHATILE for letting us have him and Scarette!