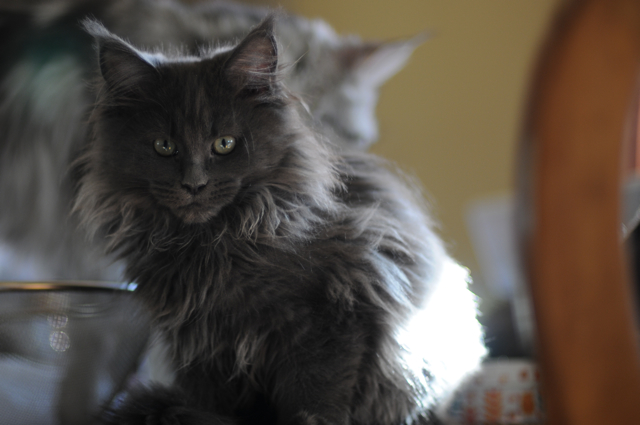 Amrita’s life was a bit longer than her litter brother Max.

Amrita, born as a blue solid girl really looked like her father Leon.

We had 3 blue solids, such as Leon, Gabriel, and Amrita, I use to call them “Trio the Blue”.

She looked wild and her coat was really shaggy and was so blue.
She was something that came from the different world.

May be Amrita was the very one always sticking to her father.
After 3 months old, I often saw her following her Blue Solid father.

When she became 5 months old, she suddenly got ill.
Just a little after Max, who became sick during the same month.
Since then, Max became the only one to be with her.
As we had to divide her and Max from the others, their world became to a smaller one.
Both started to live in our main bedroom. The room has loft and high cat tree, but they never had enough energy to climb or play at those areas.

Max passed away just in a week, so short, and since then Amrita had to fight with the illness only by herself.
Of course we supported her as much as we could, but till now I am not sure if the things we have done were the things what she was really expecting for.
Bravely she fought for 3 months and crossed the Rainbow Bridge.
She did not suffer at the very last moment, just passed away during her sleep.
May be Max came and escorted her.

“You did your best. If you are satisfied, follow me.”

Amrita fought very well. She lived till 8 months old, nearly half of her life time she was fighting.

I still can hear her purring sometimes from the sky.
May be she and Max are sending greetings to us from high above.

About origin of the name:

Amrita was taken from the name of the female dragon master whom appears in the TV game.

Amrita is repeatedly referred to as the drink of the gods, which grants them immortality.
Amrita features in the "ocean-churning" (Sanskrit: Samudra manthan) legend. It describes how the gods, because of a curse from the sage Durvasa, begin to lose their immortality. Assisted by their mortal enemies the asuras, they churn the ocean (which was made of milk in those days) and create (among other wonderful things) amrita, the nectar of immortality.
"Amrit" is also a common Hindu first name for men; the feminine is "Amritā".
(From Wikipedia)