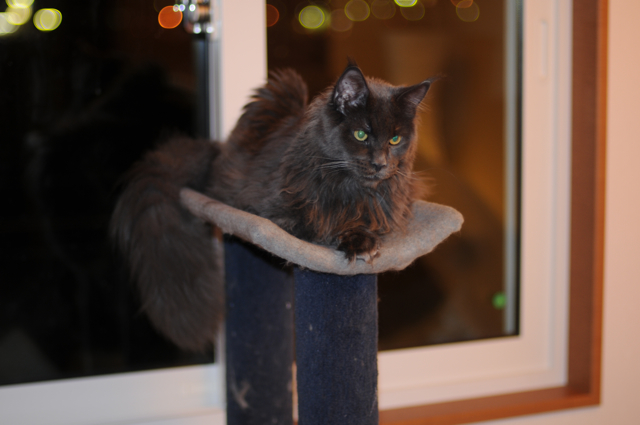 His mom is Emily and dad is Leon.
He and Raphael are the litter mates.

Has the same color as his father, blue solid.

If Raphael is the "Sun", Gabriel is the "Moon".
I thought about naming them as "Apollo" and "Artemis" but as they were both male, I had to give up this idea.

His brother is really a straight forward guy and Gabriel is the one to follow.

But as because Gabriel was there, Raphael could stand under the spot light.

Really gentle and kind, or in another word Raphael was just "Pushy", Gabriel was just like his father.

Almost everything, meal, toilet, cat teaser etc., everything were "After you, Rapha".

Even a modest guy, we formed a group with father Leon and his younger sister Amrita.
Group was called "Trio the Blues".

Team itself didn't have a chance to perform something because of loosing Amrita.

And Gabriel himself moved to Okayama in Feb., 2009 when he became 10 months old.


About origin of the name:

From the name of the Archangel, same as Raphael.
Gabriel is the angel who serves the message of God.

Another source is from the name of the dog owned by Mamoru Oshii, a director of Japanese animation.

But I personally chose this name to follow Micael.

Gabriel is also the very one our Micael loved and cared.